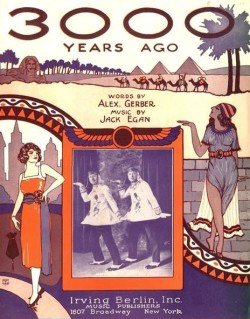 The discovery of King Tut's Tomb is the obvious source of this song.
Lyrics

Walla Walla Murad Ramesis Wiggi Waggi Whoa.
That's the way they used to talk three thousand years ago
I met two Egyptian mummies from King Pharaoh's tomb
They dug them up three months ago, but they don't know by whom.
They told me all about King Tut and everything they knew
And all the things they spoke about I'll now translate for you.
The world has changed an awful lot, they want you all to know,
But they still hear the jokes they told three thousand years ago.
Back in the days of Pharaoh all the women didn't dress
But after looking at the girls today, they wear much less.

Hokus Pokus Blintzes lollypop Alley-up Woof Woof
Which means in Egyptian lingo, "I'm the horse's hoof"
Old King Pharaoh had two hundred wives to treat him rough
Today if you've got just one wife you've got it tough enough
Then ev'ry woman wore a veil to hide her face from view
I saw a lot of girls today who ought to wear 'em too
The ladies would salaam their men or else they'd get the sack
If you salaam the girls today you bet they'll slam you back.
Years ago they rode on camels and they felt like lords
Gee they were lucky 'cause they did not have to ride in Fords.

Hotsy-totsy-bimbo-ballyhoo-shine 'em up spaghett'
That means in Egyptian:"Have you paid your taxes yet?"
In the days of Pharaoh, everybody lived in tents
They didn't have to worry 'bout the raising of the rents.
There were no bill collectors, who sell on installment plan
Who get a dollar down, and then a dollar when they can.
They never had to worry 'bout the price of bread and meat
They had a lot to grass and other things that they could eat.
Those Egyptians never heard of profiteering men
And I understand that they had no bananas then.

Aba-daba-Mogul-hitchy-koo-Haig and Haig-zip-zip
That's the way they asked if you had something on your hip.
Egyptians used to paint their faces only when they'd fight
Now you see the women paint their faces day and night.
They had no swell cafes, the fellows never spent a cent
And all they did was walk the girls around the Orient.
They used to have horse races, but they'd never bet a dime
I saw some horses run today, from old King Pharaoh's time.
I ate some eggs today, and now I'm feeling very low
Those eggs were very fresh, I'll say, Three Thousand Years Ago.

Eenie-meenie-dodo-calico-poker-put and take
In Egyptian that means:"Cut yourself a piece of cake."
Old King Pharaoh never heard of any suffragettes
And he never saw those flappers who smoke cigarettes.
When a fellow wanted some girl for his better half
He'd give her father in exchange a bulldog or a calf.
A girl would never dare to take a fellow to her door
And when she got him there just say,"That's all there is, no more"
'Cause in the days of Old King Tut, they had a funny law
If any woman broke your heart, then you could break her jaw.

Jimbo-jambo-Moxie-sagamore-ale and lager-beer
That means in Egyprian:"Don't you tell my wife I'm here"
Egyptian gladiators they could throw a bull or cow
But they never threw the bull the way we throw it now.
They used to box and wrestle, and hold other such events
A champion fighter used to get a dollar, thirty cents.
They never heard of radios, or sent a telegraph
They sent long distance wires by the neck of some giraffe.
I tried to 'phone but central wouldn't answer me at all
I think three thousand years from now, perhaps, I'll get that call.