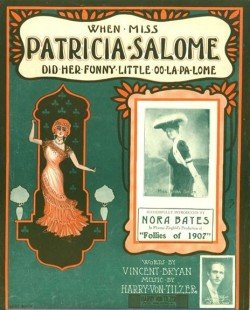 Sung by Nora Bayes in the Broadway show Ziegfeld's "Follies of 1907."

The American Protective Association (A.P.A.), founded in Clinton, Iowa, in 1887, opposed Roman Catholic influences in education and politics due to increased immigration. The movement lasted until 1911. In this song the Irishman is protesting the [pseudo-] Spanish atribution of a colleen, a different kind of importation.
Lyrics

Bridget McShane is a lady who was never in Spain,
She joined a show and became a Spanish dancer you know;
Soon on the stage, with her castanets she was all the rage
In Yankee land she was in demand 'tis true.
Last week she topped the bill, Advanced in Vaudeville,
And as Patricia Salome she now is known.

Mike in a rage left his seat and tried to climb on the stage.
He stopped the show When he shouted "that is Biddy, I know!"
He was in doubt, when the ushers told him they'd put him out
Stopped at the door to see Bridget dance once more.
He gave her Just one look, Then he cried, "Get the hook!"
And yelled "take her away, that Spanish A.P.A."