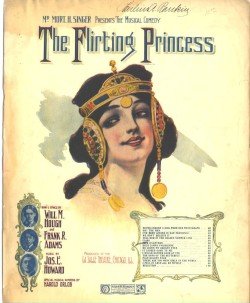 Type
Song
Composer
Jos. E. Howard
Lyricist
Will M. Hough & Frank R Adams
Copyright
1909
Publisher
Chas. K. Harris
Show/Movie
The Flirting Princess
Notes
The cover may reflect one of the other songs in this show,"Cairo," which has not been added here. The chorus lyric reveals this to be one of the "coon" songs popular in the early 20th century.
Lyrics

'Bout the time the sandman

Sprinkles all the stardust in the sky,

When the whisp'ring breezes

Sing the song of hush-a-bye,

Then I'm sort of waiting

When Jack O'Lantern comes around.

You're my jolly old Jack O'Lantern

And I love the merry twinkle in your eye.

You chase the blues;

You're the fellow that I will choose.

Ev'ry night time will be the right time

To be spooning underneath the silver moon,

If you whistle I'll be there

With my Jack O'Lantern coon.

I gave him his nick-name

'Cause he has a Jack O'Lantern smile

He's so bright and shining

You can see his grin a mile

If he will take me out with him.