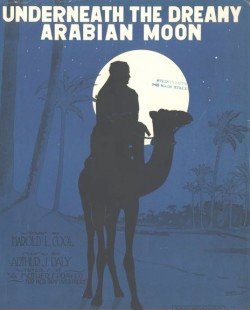 Out in the East on a desert so grand,
There roamed a quaint little Bedouin band;
While the soft winds played, ev’ry night there strayed,
To a fair oasis a young Arab and a maid;
She tells him with her eyes,
Softly then he replies.

CHORUS:
Your dark eyes filled with the light
Of an Arabian night,
Lightning flashes from beneath your lashes, filled with love, dear;
Across the desert I ride,
With the starry sky for my guide;
I seem to see your glances,
Sparkle and gleam thro’ the night like lances;
And as the moon tips the crest,
Flashing the news to the West;
Tells me there’ll be a wedding soon;
Arabs will soon be raiding,
The hearts of maids they’re serenading,
Underneath the dreamy Arabian moon.

Softly the breath of the desert will blow,
Softly the night’s creeping shadows will show,
Arabs on their way at the close of day,
From afar and near they’re in their wedding array;
Just as the fading light,
Reveals a dreamy night.