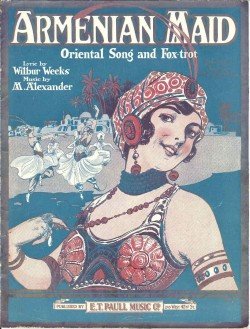 Type
Song
Composer
M. Alexander
Lyricist
Wilbur Weeks
Copyright
1919
Publisher
E. T. Paull, New York
Notes
This song was prompted by the reports of the Armenian massacres coming from Turkey and reflects how popular songs capitalized on contemporary events and influenced the popular sentiment in America about that tragedy. The Committee for Relief in the Near East launched a $30,000,000 campaign for Armenian and Syrian relief. One part of that campaign was the showing of the film "Ravished Armenia," produced by the National Motion Picture Committee that included "Auction of Souls." Aurora Mardiganian made personal appearances at the movie houses to raise public awareness of the situation among the "starving Armenians."

Above the title is the notation: "Specially Dedicated to Aurora Mardiganian," Inside the cover is her photo and brief resume: "The Armenian Maid. The sole survivor of the million Armenian maids who were taken by the Turks in the Great Armenian Massacres. Now appearing in the great photo play of her people's tragedy, "Auction of Souls."

Inside the back cover is "The Message of an Armenian Maid to all Sweethearts Everywhere/ When you, who are the Sweethearts of other lands, hear this beautiful melody, which tells of the love of lads and maids in my own native land, will you not make just a little room in your hearts for me? I am almost the only Armenian Maid left alive of all those who used to live and love and play in my Armenia. I had a sweetheart, too, who used to sing to me just such pretty songs as this. And I used to watch for him to come into my father's garden every night when the moon came up, and I used to make sweet plans for the time when we could walk together in a garden all our own. But our Sultan sent his soldiers through Armenia to take away all the pretty Armenian Maids, that they might be sold into the harems of the Turks. They took me, too, and killed my sweetheart just as they killed the sweethearts of all the other maids who were carried away. I was the only one who escaped to this beautiful America - but I have no sweetheart now; no one to sing pretty songs to me. Where love used to nestle in my heart there now is only the pain of memories and the lonesomeness that comes when I think of all my people lost in the Great Massacres, and of the big Sweetheart Boy who was taken from me, his own Armenian Maid. Sincerely yours, Aurora Mardiganian."

This song is described on the cover as an "Oriental Song and Fox-trot," hardly the type of native music of Armenia that her sweetheart would sing.

The back cover has a promotional sample of Harry Kennedy's ballad, Say "Au Revoir" But Not "Good-Bye," an interesting juxtaposition of sentiments with the cover song.

Valley village where the grape vine grows,
Mountain summit bathed in sunlit snow,
Lovely maid I learned to love you there,
When, as children all the world was fair.

Dark your hair as purple grapes that grow,
Rosy are your cheeks like sunkiss'd snow,
Pearly teeth and smile that holds my heart,
Why, ah! why from you did I e'er part.