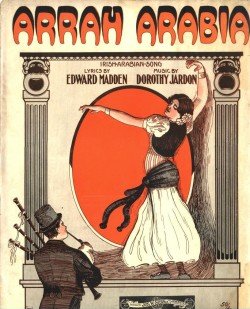 Also "Becky from Babylon" and the later "Latin from Manhattan."
Lyrics

On Coney Isle where balmy breezes blow, There lived an Irish dame.
She won a smile down in a ten-cent show, She wiggled into fame.
They called her "Arabia" and talked of her dancing,
She looked entrancing, dark eyes a-glancing,
Pat McCann, an Irishman, who caught her a-prancing,
Says, "Faith, I know that smile." She never saw the Nile!
She came from Erin's Isle!

CHORUS:
Arrah! Arabia, Arrah go-wan!
You're no Hindoo baby with an old lace curtain on;
You can smoke your Turkish Trophy,
But your name is Maggie Brophy,
Faith you look as if you'd bite us, when you dance the gay St. Vitus,
Arrah go-wan, Arabia!

Next night McCann went down to see the maid with bagpipes and cobeen.
When she began, with all his might he played, The "Wearin' of the Green,"
She got twisted, he insisted, bagpipes a-squealing,
The[y] started spieling, jig dance and reeling,
Bombashays and U.S.A.'s Says Patrick with feeling,
"They suit the heathen Turks. I've spoiled Arabia's works;
She'll dance no more in jerks!