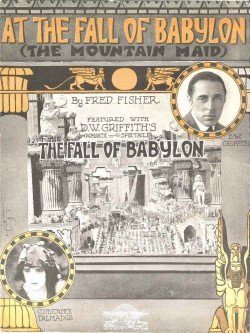 The song was "featured with D. W. Griffith’s romantic spectacle 'The Fall of Babylon'" [1916]. The cover also shows a photo of the massive set and has two inset photos of D. W. Griffith and Constance Talmadge.

The story line of the song is awash in stereotypes: chaste rural girl loved by young swain, but co-opted by wicked King, taken to the city where she is lusted after by "the priests and beasts of Babylon." Esther-like she warns the King of an impending tragedy. But "love conquers all," so ending the clichés.
Lyrics

There came a maid, mountain maid, down in Babylon,
She loved a King, mighty King, down in Babylon.
There was a lad, wistful lad who loved her too
So that he could win this maiden's hand
He betrayed his King and native land,
When the fight was o'er, his dreams came true.

She was a wild mountain child, with a manner bold,
She was a child undefiled with a heart of gold,
Sought by the priests and beasts of Babylon,
To the King she owed her gratitude
Loyal and faithful was her attitude,
But too late she warned him of his fate.