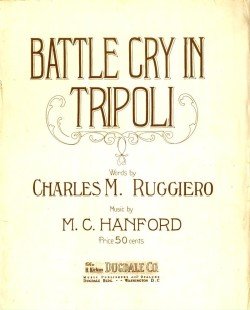 On September 28, 1911, the Italian government launched an attack on Libya and drove the Ottoman armies from Tripoli and Benghazi. Although guerilla war continued in the interior of the country, the Treaty of Ouchy was signed on October 18, 1912, allowing Italy to remain in Libya, but requiring her withdrawing from the Aegean Islands it had occupied in the war (Italy remained there "claiming the empire continued to incite Arab warfare in Libya"[Fisher & Ochsenwald,4th, p. 330].

Dugdale is a vanity press and there is no indication in this publication as to what prompted Ruggiero to write this "Marziale" piece other than the obvious nationality connection.

Now the fight is almost o'er,
The wily Turks are looking sore,
Sing, brave comrades, sing and say,
No Turk nor Arab here must stay,
Fight we always sure we must,
Until we see that rights are just,
Long live our Italian land,
And fair Tripoli no Turks shall strand.