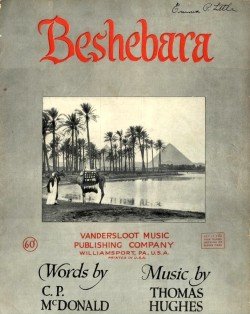 In the land of Pharaoh lived a maid
Whom the natives called the queen of dance,
While the reeds and hautboys nightly played
Came an Arab sheik with his romance
Softly rose his voice upon the air,
As this chieftain wooed his lady fair.

When the crescent moon comes o'er the hill
In the shadow of the mosque I'll be,
While the whole world sleeps and all is still
Then I know that you will come to me.
On my Arab steed away we'll fly,
Moslem love like ours can never die.