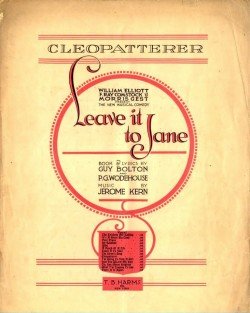 Type
Song
Composer
Jerome Kern
Lyricist
P. G. Wodehouse
Copyright
1917
Publisher
T. B. Harms Co.
Show/Movie
Leave it to Jane
Notes
Steven Blier in Allan Kozinn,"Words to Express the Ordinary" (NYTimes, 2/24/02, pp. AR43, 49) suggested the song be sung first "in the key of C, then progress to D flat and then to D in subsequent verses to give the song more punch. He also suggested that she [soprano Christianne Tisdale] imagine herself as a secretary on her lunch break who had entered an Egyptian room in a museum and wanted to be like Cleopatra." P. G. Wodehouse was to be celebrated in the New York Festival of Song at Hunter College.
Lyrics

In days of all beside the Nile A famous Queen there dwelt,
Her clothes were few, but full of style, Her figure slim and svelt;
On ev'ry man that wandered by She pulled the Theda Bara eye;
And ev'ry one observed with awe That her work was swift, but never raw.

CHORUS:
I'd be like Cleopatterer, If I could have my way,
Each man she met she went and kissed, And she'd dozens on her waiting list.
I wish that I had lived there, Beside the Pyramid;
For a girl today don't get the scope, That Cleopatterer did.

And when she tired as girls will do, Of Bill or Jack or Jim,
The time had come, his friends all knew, To say good-bye to him.
She couldn't stand by any means, Reproachful, stormy farewell scenes;
To such coarse stuff she would not stoop; So she just put poison in his soup.

When out with Cleopatterer, Men always made their wills,
They knew their was no time to waste When the gumbo had that funny taste.
They'd take her hand and squeeze it; They'd murmur "Oh, you kid!"
But they never liked to start to feed Till Cleopatterer did.

She danced new dances now and then, The sort that make you blush.
Each time she did them scores of men Got injured in the rush.
They'd stand there, gaping, in a line And watch her agitate her spine;
It simply used to knock them flat, When she went like this and then like that.

At dancing Cleopatterer, Was always on the spot.
She gave those poor Egyptian ginks Something else to watch besides the sphinx.
Mark Antony admitted That what first made him skid,
Was the wibbly, wobbly, wiggly dance That Cleopatterer did.