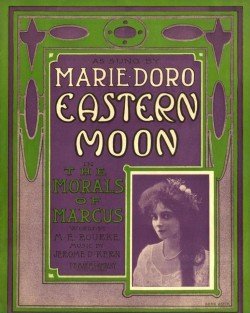 With an Eastern caravan, Rode an Arab man,
And an Arab maiden too, One who loved him true,
None other knew for she Was dressed just as a boy should be,
And to the Eastern moon, At night this song she'd croon.

Nestling near him like a bird, Love was all she heard,
While the camel's tinkling bell, On the night air fell,
And oft at mornings light She still was whispering "good night,"
Forgetful of the moon, Who heeded not her croon.