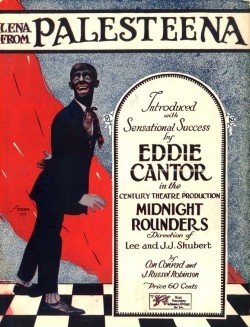 Subtitle
Lena from Palesteena
Type
Song
Composer
Con Conrad & J. Russell Robinson
Lyricist
Con Conrad & J. Russell Robinson
Performers
Eddie Cantor
Copyright
1920
Publisher
Shapiro Bernstein, New York
Cover Artist
Wohlman (both versions)
Notes
Stereotypes abound:
Lena is fat, hence undesirable in New York, but acceptable in Middle East. ("They like 'em plenty that way out there" as is said of Egyptian Ella, another expatriate plump lady.)
The music she makes sounds awful to American ears but is a hit in the Middle East where "music" to their ears sounds like cats howling to Americans.
Palestine is a desert country where camels roam across the sand.
Arabs live in tents.
Arab women imitate Lena's style of dress, but the result is nonsense ("some wear oatmeal, some farina").
Lyrics

In the Bronx of New York City Lives a girl, she's not so pretty,
Lena is her name;
Such a clever girl is Lena, How she plays a concertina,
Really it's a shame;
She's such a good musician She got a swell position
To go across the sea to entertain,
And so they shipped poor Lena Way out to Palesteena,
But now I hear that she don't look the same:
They say that

CHORUS:
Lena is the Queen O' Palesteena, Just because they like her concertina,
She plays it day and night, She plays with all her might,
She never gets it right, But how they love it, want more of it;
I heard her play, once or twice, Oh! murder! still it was nice;
She was fat but she got leaner Pushing on her concertina,
Down old Palesteena Way.

Lena's girl friend Arabella Let her meet an Arab fella,
She thought he was grand,
On a camel's back a-swayin' You could hear Miss Lena playin'
O'er the desert sand;
She didn't play such new ones, For all she knew were blue ones,
Still Yousoff sat and listened by his tent,
And as he tried to kiss her She heard that Arab whisper,
"Oh! Lena, how I love your instrument."
They say that

CHORUS:
Lena is the Queen O' Palesteena, Just because they like her concertina,
Each movement of her wrist, Just makes them shake and twist,
They simply can't resist, Her music funny gets the money;
There's nottin' sounds like it should, So rotten it's really good;
All the girls there dress like Lena, Some wear oatmeal, some farina,
Down old Palesteena Way.