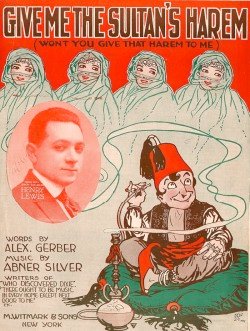 I had a dream last night that was immense

I dreamed that I was at the Peace Conference,
Where England and France and Italy
Each got her share of her indemnity.
And after they divided up the dish,
They asked me if there's anything that I'd wish.
I was so shy, I thought they'd die,
When I made this reply:

CHORUS:
Give me the Harem, the old Sultan's Harem, That's the only thing I crave.
The Sultan's too old, for he's past eighty-three,
And his thousand wives need a fellow like me.
I'll never beat them, with kindness I'll treat them, And all that I ask is a trial;
Imagine me sitting on a carpeted floor,
Telling my slave to bring me wife "Ninety Four."
I'll be so gallant, I'm chucked full of talent,
Won't you give that Harem to me?

The diplomats all listened to my plea,
They wondered just what was the matter with me,
But I kept on asking for a trial,
I tried to show them it was worth the while.
Just then they asked if I was qualified,
And I replied, "You folks will be satisfied,
I'll prove to you, that I'll be true,
But here's what you must do:"

CHORUS:
Give me the Harem, the old Sultan's Harem, That's the only thing I crave,
I'll take off the veils that they wear on their face,
The young ones I'll keep and the old ones I'll chase.
I'll give them freedom, on garlic I'll feed 'em, So they can grow stronger for me,
King Solomon was four hundred years when he died,
If I live till forty three I'll be satisfied,
I'll be a wizard, a real Harem lizard,
Won't you give the Harem to me?