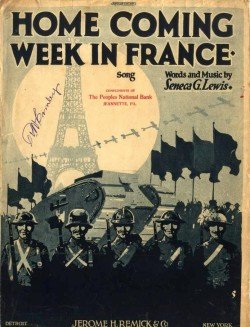 Were there North African troop units fighting in the French Army to provide the "Arabs?"
Lyrics

Have you heard about the grand review to be held in gay Paree
What you might call Old Home coming week for the sons of Liberty
All the races and ranks, all the aces and tanks
Will be back from the watch on the Rhine
And in that parade of Democracy's hosts
Here is what you will see in the line:

CHORUS:
There's the grand old flag, you're a high-flying flag
Hear that color'd ragtime band,
It's a long way to Tipperary,
That's the music from the Strand,
All the way from the streets of Cairo see those Arabs prance and dance,
It's All for One and One for All,
At Old Home Coming Week in France.

Kiltie soldiers and the Hindu troops marching side by side you'll see
Color won't count, It's just what you are, if you stand for Liberty
The commanders and the aides of all climes and all shades
Will be stepping to victory's time
And in that array of all nations and men
Here is what will be first in the line: