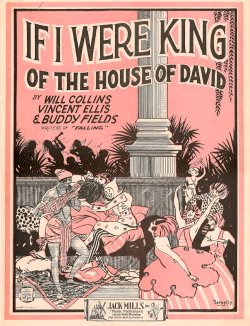 Type
Song
Composer
Will Collins, Vincent Ellis and Buddy Fields
Lyricist
Will Collins, Vincent Ellis and Buddy Fields
Copyright
1923
Publisher
Jack Mills, Inc., New York
Cover Artist
Barbelle
Notes
Written after the discovery of Tut's tomb, but with a perfect mishmash of "sheiks," King Cole and many "queens."
Note that the Kingdom of David is not a foreign country, but it is located somewhere in England or America.

"Three Weeks" (1907) by Elinor Glyn (=nee Sutherland, 1864-1943) is the story of a young English aristocrat seduced by a Balkan queen (thought to be a fictionalized account of an affair by the author). One scene in the book inspired the doggerel: "Would you like to sin/ With Elinor Glyn/ On a tiger skin?/ Or would you prefer/ To err/ With her/ On some other fur?" She was also the originator of the "It" girl, played by Clara Bow.

Kings of old were brave and bold but listen to me
And I'll tell you what I'd do If king I should be,
I wouldn't rule a kingdom that is lying o'er the sea
But there's a spot I'd give a lot If its ruler I could be.

I've been told that old King Cole was gay constantly,
With his pipe and with his bowl And his fiddlers three,
And old king Tut went off his nut for some Egyptian dame,
And if I ruled this kingdom I would no doubt do the same.