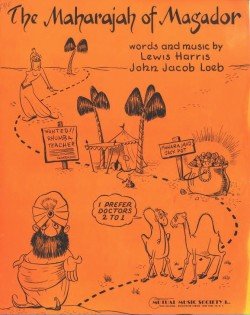 There's a rich MAHARAJAH OF MAGADOR
Who had ten thousand camels and maybe more.
He had rubies and pearls and the loveliest girls
But he didn't know how to do the Rhumba.
He could afford a big reward
So to his people one day he said:

CHORUS:
AH (falsetto a la comic Maharajah), Which means
Take my rubies and take my pearls
Take my camels and take my girls,
Rhumba lessons are wanted for
The rich MAHARAJAH OF MAGADOR.

So a slick little chick answered, That's for me
To the ad he had placed in Variety.
When she saw his expanse she could tell at a glance
That he'd never learn how to do the Rhumba.

CHORUS:
AH (falsetto a la comic Maharajah), Which means
Take my rubies and take my pearls
Take my camels, I'll keep my girls,
From now on you'll be working for
The rich MAHARAJAH OF MAGADOR.

He was anxious to learn so she taught him right
But she taught him the thrill of a moonlight night.
He discovered the bliss of a half promised kiss
But he never learned how to do the Rhumba.