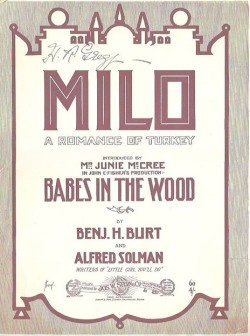 I met a girl named Milo,
I knew at Coney Isle-o,
When I was out in Turkey looking for work;
I met her in the Harem dancing the "don't you care-em,"
She made a fascinating Yankee Doodle Turk.
She was the leading dancer, so now you see the "answer,"
I wanted Milo, she wanted me:
But when I asked the Sultan, while we were out at luncheon,
My proposition he couldn't see;
So Ev'ry night, when he slept tight,
In his backyard I would sing: Oh!

CHORUS:
Milo, You're just my style-o,
I'll take my hat off to you,
You've got me guessing, it's true,
I've a feeling for you,
My Milo, say yes! and smile-o!
We'll live in style-o, My Milo,
All life through.

She told me she had landed when "Florodora" stranded,
She'd been a "pretty maiden" once one a time;
I found when we had spoken, her home was in Hoboken,
She knew my parents and a lot of friends of mine.
I told her that her mother, her sister, Aunt and brother,
All could stop working and live on me;
So while his "Nobs" [?"Nibs"?] was sleeping,
From Turkey we were sneaking,
To Coney Isle-o, down by the Sea.
A boat we took, to Sandy Hook, and the band began to play: Oh!