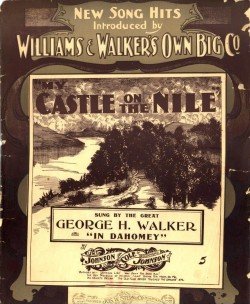 Type
Song
Composer
Rosamond Johnson
Lyricist
J. W. Johnson & Bob Cole
Performers
George H. Walker
Copyright
1901, 1928
Publisher
Jos. Stern & Co., Edward B. Marks Music Co.
Show/Movie
In Dahomey
Notes
At the end of the 19th century the flood of immigrants from southern and eastern Europe into America prompted a response in the creation of various genealogical societies (Mayflower Descendants, D.A.R., etc.). At the same time the emergence of the nouveau riche industrialists buying their cultural trophies and seeking titled husbands for their daughters presented another target for satire. This song is the African-American response.
Lyrics

Dere ain't no use in try'n to rise up in the social scale,
'Less you kin trace yo' name back to de flood.
You got to have ancestral halls an' den you mus'n't fail,
To prove dere's indigo mixed in yo' blood.
I done foun' out dat I come down from ole chief Bungaloo
My great-gran'-daddy was his great gran' chile.
An' so I'm gwin' ter sail away across the waters blue,
To occupy my castle on de Nile. In my

CHORUS:
Castle on de river Nile
I am gwin' ter live in elegant style;
Inlaid diamonds on de flo',
A Baboon butler at my do'
When I wed dat princess Anna Mazoo,
Den my blood will change from red to blue,
Entertaining royalty all de while
In my castle on de Nile.