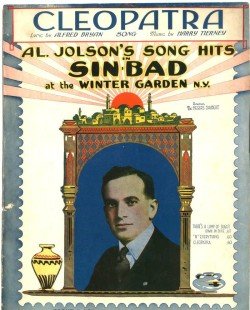 You've heard of Cleopatra who lived down beside the Nile,
She made a "Mark" of Anthony and won him with her smile.
They say she was Egyptian, but I've reason to construe
She was Jewish and Hawaiian with a dash of Irish, too.

CHORUS:
When she stroll'd with bold Mark Anthony on Egypt's yellow sands,
You could see that she was Jewish by the motion of her hands.
She would shake her hands and shoulders off,
That's the way she made her "muscle tough"--
I think she was Hawaiian from Honolulu too,
She would dance like this to the Yaka hoola, hicky doo-la, Yaka hoola, hicky doo.
Her mother's name was Cleo and her father's name was Pat,
So they called her Cleopatra, Now what do you think of that?

She had a thousand lovers in the true Egyptian style,
When she grew sick of one she threw him to the crocodile,
They say she died heeart-broken after many sad regrets,
I really think she died from smoking Milo Cigarettes.