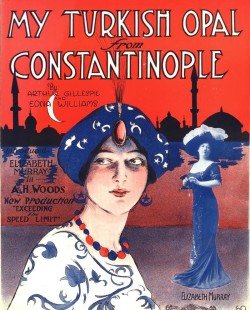 An Irish Turk named Pat McGuirk was sent to the Turkish war,
So off he went with his regiment upon a Turkish shore.
They called upon the Sultan, but the Sultan turned them down,
So they captured all the harems in Constantinople town.
A girl whose name was Opal danced her way into Pat's heart.
Said he, "I'd like to steal you and then from this land depart--

CHORUS:
Be my little Turkish Opal from Constantinople,
I'll be your little Irish Em'rald, and we'll have a wedding grand.
I'll build a little hut in clover with shamrocks all over,
You'll be Missus McGuirk and a regular Turk in Ireland."

Pat came back on a camel's back with saddle built for two,
Said He, "A Turk who is named McGuirk in Ireland's nothing new!"
They interviewed the Sultan and she begged for her release,
But he chased them and their camel out of Turkey into Greece.
They're living now in Ireland just outside the town of Cork
And last Thanksgiving Pat brought home a Turkey and a Stork.