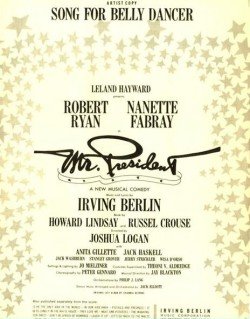 Composer
Irving Berlin
Copyright
1962
Publisher
Irving Berlin
Notes
From the musical comedy "Mr. President" with Robert Ryan and Nanette Fabray (1962). In the artist copy of the music this song is called "Song For Belly Dancer." The cast recording has Wisa D'Orso (Princess Kyra) presenting this song. The liner notes reports "Miss D'Orso, sometime stewardess for the Aloha Airlines, is a native of Hawaii and was a professional hula dancer before winning a scholarship providing her with instruction in ballet." The belly dance routine is injected into the show by the plot device of having the president's son being fond of fast cars and fast women, the latter being represented by Princess Kyra, belly dancer in a carnival. Later the president returns to his home town where the county fair is in progress. The ladies of the town are objecting the "lewd and lascivious steps" of the belly dancer, Princess Kyra, but she responds that she never moves her feet, so there are no steps to be lewd and lascivious.

Another subplot involves the president's daughter who is in love with Youssein Davair, "attached to his country's embassy in Washington, charming, too obviously handsome with a slinky sex appeal." It turns out that Youssein is a double agent, spying for Russia and the U.S.: "That's what a neutral is," he explains.

Here's Berlin in 1962, 54 years after "Sadie Salome," still playing out the stereotypes of the Oriental dancing girl: the belly dancer is from Siam; "Egyptian, Persian, there's only one version"--all orientalism is the same; the Egyptian Mummy/Mommy; the shimmy shakes along the way; then the updating twists at the end: references to Arthur Murray, the ballroom dance teacher of the masses, and the surrey with the fringe on top from "Oklahoma!"

Musically, we still have the tom-tom beats in the accompaniment and the old "cooch" line (Oh, they don't wear pants....") in the verse ["It was done like this"], with the modulation to the major key for the chorus.
Lyrics

My youth was spent in the Orient
Where they never taught me to waltz.
You'd be surprised, when I exercised,
It was never done to a waltz.
It was done like this,
But never to a waltz.

In ancient Siam women like I am
Indoors or on the street,
No woman dances with her feet.
Egyptian, Persian, only one version,
No other stands a chance.
To an Oriental fiddle,
You can see them shake their middle,
The feet don't mean a thing--
Middles are all they swing.
Even an Egyptian mummy wiggles her tummy,
Wiggles it, so and so--
That is the only dance I know.

A Greek or Roman with an abdomen
could learn to do it too,
They all could do it, so could you--
With Cleopatra, even Sinatra would have enjoyed the view,
He would enjoy it, so would you.
You don't need an Arthur Murray,
Just a fringe that's on a surrey,
Will satisfy your needs
Dancing between the beads.
Ev'rybody shake your torso,
sexy, but more so,
Shake it, come on let's go--
That's the only dance I know.