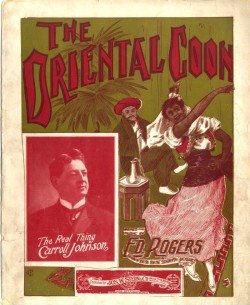 Type
Song
Composer
Ed Rogers
Lyricist
Ed Rogers
Performers
Carroll Johnson
Copyright
1899
Publisher
Jos. W. Stern & Co.
Cover Artist
G.E.N.(?)
Notes
Here is a coon song drawing on the popularity of the Egyptian show at the Chicago Columbian Exposition Midway in 1893. "Oriental" troupes were a fad after the fair closed, eventually morphing into the "Salome'" craze of the following decade when Richard Strauss' opera opened in New York. The 'Turkey bird' ("tom") takes the wench under his wing for his show, only to have a real (and obese) Turk take her away. But the Turk met his fate, with an American twist, on Thanksgiving Day, leaving the poor maid to return home and find the oriental fad has become passe.
Lyrics

On the Grand Midway stood a wench one day,
Just a-watching how folks pranc'd;
Said she, "I think, wid a naughty wink,
I could do dat style of dance."
It was overheard by a Turkey bird,
And he said, "Now if that's meant
Ma burly coon, I will teach you soon,
If you'll join my Orient.

Coon-town went wild when this color'd child
Skipp'd to Europe, so they say;
but from there she flew, with a fat Turk who
Lost his life Thanksgiving day.
Then she sail'd for home,
said "No more I'll roam!"
But her coon friends all were sore,
Her grand display, from the old midway,
They'd no use for any more.