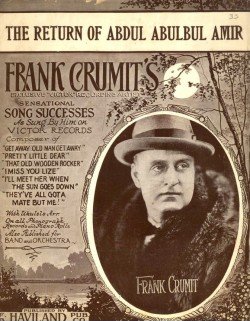 By the Sea of Saragossa I wandered one night
The moon it was shining quite clear
For no reason at all I heard someone call
For Abdul Abulbul Amir.

Now Abdul Abulbul I knew to be dead
The story had spread near and far
How he'd lost his life while plunging his knife
Into Ivan Skavinsky Skavar.

As I pondered, the moonbeams descended quite low
Casting shadows so ghostly and then
I discovered that I was standing close by,
The tombs of these two famous men.

Then in the tomb's shadow there rose from the grave,
The form of a Russian Huzzah
And my skin nearly pealed as he stood there reveled,
It was Ivan Skavinsky Skavar.

'Twas he who was calling, I hardly dared breath[e]
My heart most stopped beating from fear
When out of the grave, much in need of a shave,
Rose Abdul Abulbul Amir.

"Wouldst speak with me, Ivan?" quoth Abdul quite low
"I wouldst" replied Ivan quite clear,
"That quarrel we had, it was all to the bad,
Friend Abdul Abulbul Amir."

"I've lain here for ages with that on my mind
That's why I have called you to-night"
"I'm in the same state," quoth Abdul the great,
"'Twas foolish for we two to fight."

"Old friend thou art blameless" cried Ivan in haste
The fault lie[s] in my hands alone
But Abdul said "Nay. It was not that way
The fault was no one's but my own."

"But thou wert the greater! And I but a knave
To cast such a trucculent sneer"
"I said it was ME: And so it must be"
Quoth Abdul Abulbul Amir

"Dost think I'm a coward? Not Ivan Skavar
Step forth and I'll slice off thine ear"
"Oh son of a cat, you'll never do that"
Quoth Abdul Abulbul Amir.

Then once more they battled and fought as before
And multitudes came from afar
And lauded with cheers these bold Buccaneers
This Turk and this Russian Hussah.

'Twas just at that moment each sword found its mark
I heard a blood curdling scream
Then came the surprise, for I opened my eyes
And found it was only a dream