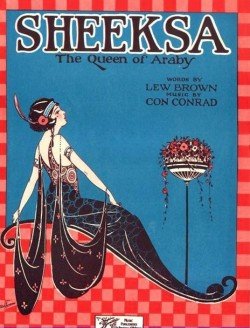 The title of the song is an obvious play on the Yiddish "shiksa" and a presumed feminine form of Sheik.

As in those other songs, the geography is hopelessly mashed, with Araby in Turkey and the Sheik in Araby/Sahara.

The costume she'll wear starts with the image of Theda Bara, but then shifts to "shredded wheat" that her admirers will find good enough to eat.

The mention of the barber chair is an example of cultural interchange: Sara will introduce the latest rage of bobbed hair to the Arabs and bring them into the modern world while affording her family back in America a living stuffing mattresses with all the shorn hair she will send back.

"The poet Harry Roskolenko describes visiting a burlesque theater with his Orthodox father one Sunday afternoon... [W]e were watching the living shikses dance and prance. Jewish girls did not do what we were seeing, said my father. They were showing this and that; derrierers, a bit of tit, all of their thighs. [Finally the burlesque chorines sang a song.]
A song: in the torah it is written
With a shikse you cannot sleep
Oh, the best piece in the world."
Ref.: Harry Roskolenko, The Time That Was Then: The Lower East Side, 1900-1914. An Intimate Chronicle (New York: 1971) pp. 144-145. Cited in Rachel Shteir, "Striptease" (New York: Oxford University Press, 2004) p. 63.
Lyrics

Lovesick Sara once read about the Sheik
She asked someone upon the street last week
If the Sheik should marry me
Tell me what I'd be,
He said, "You'd be a SHEEKSA, the Queen of Araby"
She packed her grip and say
For Turkey sailed away
She met the Sheik, he pinched her cheek,
And married her next day:

CHORUS:
Sara's the SHEEKSA of Sahara
She wears nice clothes like Theda Bara
She says her nose is Roman
And they can't see her face
But they all know it's Roman
'Cause it roams around the place
She dances for the Sheik ev'ry night
He tells her she's his Turkish delight
She's dressed in shredded wheat
And when they find it's good to eat
They'll fix her
The SHEEKSA, the Queen of Araby.

Lovesick Sara, she bought a barber chair
She made all of the Arabs bob their hair
Wrote her mother "Take all this hair I send to you
And start a mattress bus'ness
That's what you ought to do"
I'll send some ev'ry day
I know it ought to pay
If my friend Sam asks where I am
Just show him this and say:

CHORUS:
Sara, the SHEEKSA of Sahara
She got to be a holy terror
They made her ride a camel
She said,"Don't be a chump
A camel is a cripple
On his back he's got a hump
She poses on those big Turkish rugs,
And on her head she balances jugs
They know she's the Queen all-right
Because she crowned the Sheik last night
Some mixer,
The SHEEKSA, the Queen of Araby