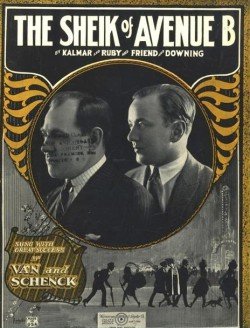 Type
Song
Composer
Kalmar & Ruby & Friend & Downing
Lyricist
Kalmar & Ruby & Friend & Downing
Performers
Van & Schenck
Copyright
1922
Publisher
Waterson, Berlin & Snyder Co.
Cover Artist
Barbelle
Notes
One of the variations on the "Shiek" set in a New York City Jewish neighborhood. The hero attracts a "Hebrew harem" to complete the oriental fantasy, but the danger is that a peaceful "salaam" turns into a nasty "slam" in the eye from an angry husband.
Lyrics

On the East-side of New York, On Avenue B.
Lives a guy creating talk, A wise-guy is he.
He has such a reputation, For making girlies fall;
Fat ones, small ones, thin ones, tall ones, He gets them all.

CHORUS:
He's the Sheik of Avenue B, I'm telling you,
He's the champ of them all.
He's no bluff, He treats girls rough;
His hugs and kisses scare 'em,
He don't spare 'em,
You should see his Hebrew harem,
He wants them all to salaam when he goes by,
Rose Goldstein's husband salammed him in the eye,
Say! he acts like a real Arabian lord,
Since he bought a brand new second-hand Ford;
Don't speak! He's the Sheik of Avenue B.

All the boys are off their nut, They're jealous of him.
They would like the girlies, but, Their chances are slim.
If a fellow gets a girlie, She only lasts a day;
He walks be and winks his eye, and takes her away.

He's the Sheik of avenue B, I'm telling you,
He's the champ of them all.
Girlies sigh, For him they would die;
He gets a girl on Sunday, Leaves her Monday,
Some girls don't even last one day.
He takes them all to the swellest cabarets,
But it's the woman who pays! and pays! and pays!
Say! all the husbands there are scared of their lives,
When they go to work they lock up their wives;
Don't speak! He's the Sheik of Avenue B.