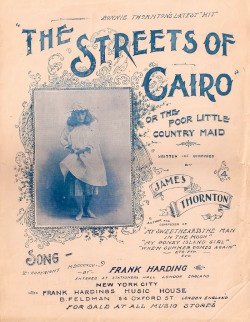 Type
Song
Composer
James Thornton
Lyricist
James Thornton
Performers
Bonnie Thornton
Copyright
1895, 1940
Publisher
Frank Harding; Calumet Music
Cover Artist
Fetherston; NPS
Notes
The "Streets of Cairo" was an exhibition at the Chicago World's Fair in 1893 that attracted great attention for its camel rides and native dancers. The legend of Little Egypt is probably not from this show but from the Coney Island, NY, copycat shows spawned by the "Salome craze" after the premiere of Strauss's opera in New York. See the article "When Cairo Met Main Street" in the section "What is Arab Kitsch."
Tags
1893
Lyrics

I will sing you a song and it won't be very long,
'Bout a maiden sweet, and she never would be wrong.
Ev'ryone said she was pretty,
She was not long in the city,
All alone, oh, what a pity,
Poor little maid.

She went out one night, Did this innocent divine,
With a nice young man Who invited her to dine.
Now he's sorry that he met her,
And he never will forget her,
In the future he'll know better,
Poor little maid.

She was engaged As a picture for to pose,
To appear each night In abbreviated clothes.
All the dudes were in a flurry,
For to catch her they did hurry,
One who caught her now is sorry,
Poor little maid.

FINAL CHORUS:
She was much fairer far than Trilby,
Lots of more men sorry will be,
If they don't try to keep away from this
Poor little country maid.